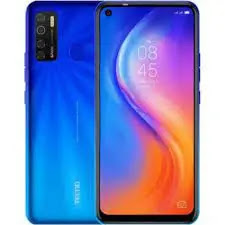 TECNO SPARK 5 comes with an Internal memory (RAM) of 2GB.

It is a Dual Nano SIM-Card phone.
When it comes to Internal storage, TECNO SPARK 5 has a storage space of 32GB, and is Expandable.

The device is powered by Android 10 Operating System (OS).

It uses a MediaTek Helio G70 Chipset, and Octa-core Processor that clocks a speed of 2.0GHz.

With this device, you get a 13 Mega-Pixels (primary camera), 2 Mega-Pixel (macro camera), and a 2 Mega Pixel (depth camera).

On average, Prices of Phones in Slot are usually about N1,300 cheaper than prices elsewhere.

The GSM (Global System for Mobile Communications) network, often known as 2G, is the forerunner to the 3G and 4G networks.

Because GSM (Global System for Mobile Communications) was created to replace the analog cellular network (1G), it is referred as a 2G mobile network.

The Universal Mobile Telecommunication System, abbreviated as UMTS, is also known as 3G and is one of the most widely used mobile communication technologies.

It adheres to the technical specifications of the 3rd Generation Partnership Project (3GPP).

LTE (short for Long-Term Evolution), is a wireless broadband communication standard for mobile devices and data terminals that is based on the GSM/EDGE and UMTS/HSPA technologies.

The 4th generation (4G) of mobile communications technology is known as LTE.

It was developed by the 3GPP to improve the speed and capacity of wireless data networks by combining GSM/EDGE and UMTS/HSPA technologies.

WCDMA is the CDMA-based UMTS standard for 3G digital mobile networks. It is the next step in the evolution of GSM and EDGE to UMTS, and it provides greater voice capacity as well as theoretical peak data speeds of up to 2 Mbps.

The 3GPP task group is still working on WCDMA’s evolution to 4G and has defined a number of evolutionary phases.

Together with TD-SCDMA and TD-CDMA, it is one of the three different UMTS interfaces.

The standard enables for better data speeds and more users to connect to the network at the same time.

It is the first program to load when the device is powered on, and its main component, the kernel, is always present in memory.

The operating system manages and controls the device’s hardware components.

A System on a Chip (SoC) is a single integrated circuit that integrates the majority of a system’s elements (chip).

A Micro-processor core is usually combined with interface elements as well as analog and mixed signal functions.

On a single substrate, it may contain digital, analog, mixed-signal, and often radio-frequency functions.

The SoC integrates several hardware components, such as the CPU, GPU, Memory, Peripherals, Interfaces, and so on, with software to allow them to function.

The Central Processing Unit, or Processor, of a mobile device is known as the CPU.

It is the part of a computer/device system that manages the interpretation and execution of software instructions or tasks.

In a computer, a bit (short for binary digit) is the smallest unit of data. A bit might have a single value or a binary value.

The bit sizes of the processor registers, address buses, and data buses determine the CPU bits.

The processor unit that executes software instructions is known as a CPU Core.

They improve the device’s performance by allowing many instructions or tasks to be executed at the same time.

The Processor’s Frequency refers to its clock rate in cycles per second.

Megahertz (MHz) or Gigahertz (GHz) are the units of measurement (GHz).

The Graphical Processing Unit (GPU) is a computer processor that handles computation for 2D and 3D graphics applications.

Games, UI, video playback, and other applications use the GPU in mobile devices.

In addition, the GPU may execute computation in applications that were traditionally handled by the CPU.

RAM (Random-Access Memory) is used by the Operating System and all installed applications.

When the device is switched off or restarted, the data in the RAM is lost.

Occasionally, the same model will be available in several variations with varying internal storage capacities.

A Memory card, often referred as a flash memory card, is a type of storage media that is commonly used in electronic devices to store images, movies, and other data.

Resolution is a measure of the number of pixels a video contains both horizontally and vertically.

See the types of Screen Resolutions below,…

HD: The display having a pixel measurement of 1280 x 720 pixels is referred to as high definition or HD.

The higher the pixel density, the better the image on a smaller HD display.

The picture quality will be determined by the screen size.

In comparison to a 10-inch screen, a 5-inch screen would have a worse picture quality.

FULL-HD: Full HD is a high-definition format that is now used in smartphones.

The pixel density, like HD, is determined by the size of your whole mobile screen.

QUAD-HD: Quad-HD, often known as QHD, is a screen resolution that is four times greater in definition than standard HD.

This means that a QHD display of the same size may fit the same pixels as four HD displays.

4K And Ultra-HD: The screen resolutions of 4K and Ultra-HD in mobile phones are sometimes confusing. However, they are not the same.

LCD: The term “Liquid Crystal Display” or “LCD” refers to a variety of crystals that are illuminated by a backlight and are widely used.

Because this screen is affordable, it is a popular choice among smartphone users.

Because there is light coming from behind, this type of screen also works well in sunlight.

AMOLED Display: Although AMOLED screens have a quicker refresh rate, they are difficult to view in direct sunlight.

OLED is an organic material that emits light when electricity is passed through it.

Unlike LCD panels, OLED displays do not turn on until they are powered up.

Aspect ratio is a property that describes the relationship between an image’s width and height. The symbolic notation for the aspect ratio is X:Y.

The X and Y values do not represent the image’s actual width and height, but rather the relationship between them.

An older Standard-definition (SD) screen, for example, had a 4:3 aspect ratio, which is a square rectangle.

The 16:9 aspect ratio of today’s TVs, monitors, and mobile devices is a large rectangle that is still not as wide as most movie theater (cinema) screens.

Pixels Per Inch (PPI) refers to the density of pixels on a display, which is measured in pixels per inch (ppi).

Pixel density is determined by dividing a display’s diagonal pixel resolution by its diagonal size.

The number of bits that each pixel in an image is represented by.

Because it is sometimes used to indicate bits per pixel and other times to represent the total number of bits used multiplied by the number of total channels, the phrase can be confusing.

A conventional color image with 8 bits per channel, for example, is sometimes referred to as a 24-bit color image (8 bits x 3 channels).

A proximity sensor is a type of non-contact sensor that can detect the presence of a target within a specified range.

Light sensors (also known as photosensors) are a type of photodetector that detects light.

To measure illuminance, respond to changes in the amount of light received, or convert light to electricity, many types of light sensors can be utilized.

In mobile phones, accelerometers are used to determine the phone’s orientation.

A gyro, on the other hand, measures angular rotational velocity, whereas an accelerometer measures linear acceleration of movement.

Both sensors measure rate of change; the rate is that they measure distinct things.

The size of the lens diaphragm opening – which governs the amount of light reaching the image sensor – is indicated by the aperture (f-stop number).

The larger the diaphragm aperture, the lower the f-stop number. As a result, the more light that reaches the sensor, the better.

Is the maximum number of frames per second (fps) that the back camera can record at maximum resolution while recording videos.

24fps, 25fps, 30fps, and 60fps are some of the most common frame rates for recording and viewing video.

Wi-Fi is a wireless technology that allows computers, tablets, cellphones, and other devices to connect to the internet wirelessly.

Wi-Fi is a trademarked name that refers to IEEE 802.11x standards. It is a frequent misperception that the acronym Wi-Fi stands for “wireless fidelity.”

In 1971, a wireless UHF packet network called ALOHAnet was built to connect the islands of Hawaii, giving birth to Wi-Fi.